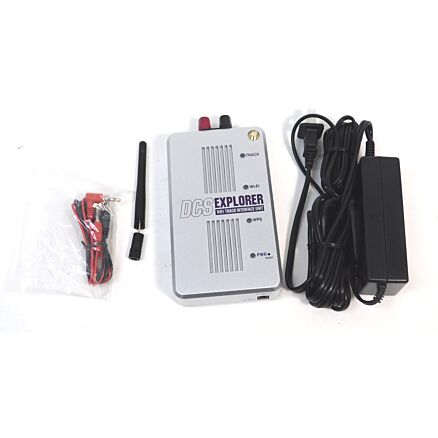 Skip to the beginning of the images gallery
Details

This is a Used MTH 50-1035 DCS Explorer Wifi Track Interface Unit.
It does not have the original box and there is no owner's manual.
The antenna is broken and the unit is missing the 5 amp fuse.
Has the power pack and wires.
Other than that, it is in great condition.

Imagine having control over your model railroad from any iOS or Android phone or tablet. How much more convenient would operating your model railroad be with the same device you use throughout your daily life? The large, bright full-color screens found on today's smart phones and tablets are perfect for accessing the DCS features found inside your Proto-Sound 2.0 and 3.0 locomotives. Better yet, the expanded range and speed of wifi ensures that your trains respond to DCS commands faster and more reliably than ever before.

when paired with M.T.H.'s DCS App and our new DCS Explorer Track Interface Unit, you no longer have to imagine controlling your model railroad with your phone, you can!

The DCS Explorer can be powered by any AC (like the Z-1000 brick) or DC power supply and plugs right into a track lockon. Once connected, access the Explorer with your smartphone or tablet's wifi connection and using the DCS App (available from Google Play or Apple's App Store) control up to three Proto-Sound 2.0 or later locomotives. Setup is simple and quick and the module can be configured as a stand alone unit or easily combined into an existing wifi network.